9.19 Initial reaction... In which our heroine gets nostalgic

Once again, this episode had things I liked and things I didn’t, and I can’t really say I loved the episode as a whole; nor did I hate it.

Yay Jody Mills, chopping off heads! (But WTF is up with your hair? It’s like a tight little black helmet.) I like that they referenced her shoulder wound from the last time we saw her.

How you boys been? “Peachy.” “Touch and go.” Oooh. I’m glad to see Sam is willing to admit things aren’t peachy, and I hope it’s because he’s talking to Jody, who is as close to a friend as he seems to have right now.

There are some nicely framed shots in this episode. I particularly like this Tarantino-esque shot from the POV of the body in the trunk.

The vampires can track Alex... so… take her to an isolated cabin? Yeah, that sounds like a plan. I do love that Jody is dressed as a hunter (t-shirt, plaid shirt, jacket).

When Dean and Sam entered the vampires’ house, for a second Sam's knife seemed to glow blue in the light of their flashlights, and I was all, be still my heart, because, you know. Hobbits.

(But seriously, they didn't hear the woodchipper when they got there?)

“This is a clean-up mission. It’s not a rescue.” Wait. Is Sam is really willing to give up on this girl? That seems really… unSammy. Doesn’t it? Did the writers force him into that position simply as a foil to Jody’s desire to save Alex? Because that’s sure what it feels like.

This was another shot I liked. But they must have parked really far away from the vampire’s nest, since it’s above freezing here and there’s snow on the ground where the vampires live. 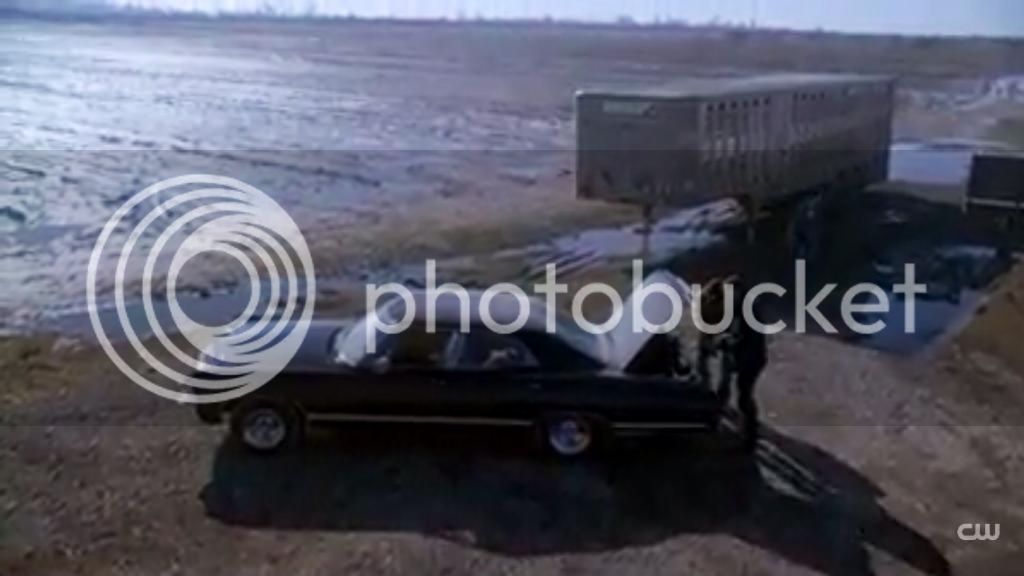 And here we are at the snowy nest:

Oh, look. Sam is tied up again. I suspected Dean was faking unconsciousness from the beginning. But I hope that’s not the case. I hope he didn’t really just pretend to be unconscious while the vampires drained a bucket of blood from his brother. Also, if I were a vampire who wanted to pack a lunch? I wouldn’t want a bucket of cold, congealed blood. I’d just truss Sam up and throw him in the trunk. (Actually, I’d take Dean or Jody. They’re more travel-sized.)

When Dean fights the vampire, is he using superhuman strength? Do vampires have super strength? I can’t remember. (And, you know, it’s likely to have changed anyway.) Anyway, “look at me, bitch” is kind of cold-blooded and I guess we’re blaming it on the Mark. Dean would have killed this vampire anyway. And he would have enjoyed it anyway, no matter what Sam says later. But, okay, for the sake of argument, I’ll accept that this is the work of the Mark. It’s also a nice contrast later when Jody kindly tells Alex not to watch “Mama’s” head being chopped off.

“Yeah, I know, you wouldn't have done the same for me.” Is that what he said? Did Dean just say that to Sam? Seriously??????? I don’t even know what to say about that. Other than I love that Sam doesn’t even address it. Because Sam, woozy “tapped keg” Sam, immediately remembers they need to save Jody. Bless you, Sam.

The scene back at Jody’s cabin was awkward in that it seems like it’s the first time Sam and Dean have actually discussed the hunt, and yet it’s obviously some time later. Sam is still worried about Dean, Dean is still adamant that everything is “peachy.” But I kind of feel like I’ve been left hanging.

This episode would have seemed a lot better if I hadn’t watched it Wednesday morning. Because when it was over, I flipped to TNT and caught some of three episodes from season 4 (not something I normally get to indulge in, but I had to take off work to wait for a delivery). And it was SO DAMN GOOD. Post-Hell Dean, Sam with his magnificent S4 hair and S4 face and tight grey t-shirt (yes, the GVTS!), BAMFing Angel of the Lord Cas… Sadly, everything from S9 pales in comparison. I can’t help thinking about what I missed, not being part of real-time fandom during the golden years. How much fun it would have been to see Dean confess that he does remember Hell but isn’t ever going to talk about it, or watch Sam banging a demon, and then talk about it with other fans. It makes me sad.

So, there are only four episodes left, is that right? And one of them will be setting up the spinoff, so it probably won't have much (if anything) to do with the current arc?

As always, I’m unspoiled, please help me stay that way.