Having watched 15.20 (on its six month anniversary!) yesterday, followed immediately by 1.01, I have some thoughts.


This was the first time I watched "Carry On" since I rewatched it for my episode review back in November. I had forgotten how bad Sam's hair looked. I forgot how much I loved Sam genially explaining that he was going to slowly and painfully saw the vampire's head off. I had also forgotten how Dean's speech in the barn was affected by his injury, how he made those pained little noises, how he faded at the end.

I never did go back and tick off the Things I Wanted From the Finale. I expressed some wishes (here and here) and was generally surprised at how many of them came true.

And yes, there were things I specifically did not want to happen. And they happened.

And there were things I didn't even think to wish for.


Was it perfect? No. Especially in comparison to the Pilot. The cinematography, the writing, the overall look and feel and mood of the Pilot reminded me that I watched season 15 because I fell in love during season 1. And I'm a little bummed that the brothers never learned about the voice mail, or that Cas let Sam out of the panic room. But despite all that, six months later I can look back and say yeah, our little Show did pretty good. 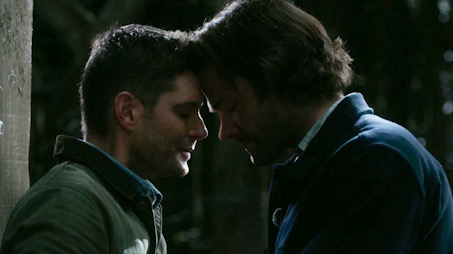 I love you so much, my little Show.
Tags: 15.20 carry on, rewatch reaction, season 15, supernatural
Subscribe