Guys, I'm going to start with a story about my refrigerator. Trust me; it's relevant.

We bought a new refrigerator a few months ago and I can't even tell you how much I love this thing. It's kind of embarrassing. My husband actually makes fun of my affection for it. It's stainless steel, armoire style, which means the freezer is a drawer on the bottom and it has two doors on top that open, well, like an armoire and it's gorgeous and it has cool LED lighting and the fridge is RIGHT THERE, you don't have to stoop to find stuff on the bottom or in the back, the doors have huge shelves that hold a bottle of wine (and other things of course) and I just love it more than one should love an appliance.

The freezer, however, is a goddamn nightmare. Picture two small laundry baskets inside a drawer. You can't get them out of the drawer. You can't really organize them. You can only see the top layer. This is my freezer, and it sucks. But do I care? Does it detract from my unnatural love for this refrigerator? No. Because the good is SO DAMN GOOD that it makes me not care about the bad

You know where I'm going with this. Soul Survivor (10.03) is my refrigerator. So let's get the contents of the freezer out of the way first.

In tiny laundry basket number one, Crowley misses Dean and his minions have no respect for him and he's having them executed and one of them wants to be his wingman and one sets himself on fire with something? holy oil? and I never thought I'd say this but I don't care and I want Crowley off my screen.

In tiny laundry basket number two, Cas is driving and Hannah is making goo goo eyes at him. She passes him a note that says "Do you like me? Check one: [ ] yes [ ] no." Cas checks no, and they show up here.

The last time we were at a little gas station very much like this one, Dean had just been rescued from Hell. Oh, Show. What lovely symmetry.

And then they're ambushed by the surviving renegade angel from 10.01 (whose name I don't remember and can't bother to look up because I don't care), who I guess stabs Hannah? I didn't catch it. And then almost kills Cas, but the cavalry shows up, in the form of Crowley, who steals her grace and puts it in Cas. Cas asks "why did you help me?" but considering how he felt about taking another angel's grace, it seems more like assault than assistance. Crowley tells him he wants him to cure Dean because he doesn't want him to be a demon any more and... okay, what's this going to solve? Crowley's minions still have no respect for him, and Dean being human again isn't going to change that. Whatever.

Let's get to the good stuff.

We start with Sam (and my newest fetish, Hot Doctor Sam), watching a priest bless some bags of blood in a cooler. Oh, Smart Sam! You're back! I am a little confused, because after the priest leaves, Sam takes more bags of blood out of the refrigerator and adds them to the cooler. Have they already been blessed? Does this facility bless all of its blood? (Does it matter? No. Stop asking stupid questions and just stare at Hot Doctor Sam for a minute until you feel better.)

Throughout all of the Sam/Dean scenes, Dean is the same as we saw last week... sly, snarky, and fantastic. Sam, on the other hand, swings wildly from cold-blooded hunter to kicked puppy to concerned brother to cornered bunny, and it's all breathtakingly good and I'm having a problem because I want to cap all of it and I'd basically have to put the entire episode on here, one frame at a time. Not that there's anything wrong with that.

Dean makes it clear that any demon healing is being done against his will, and says he'll leave Sam alone if he lets him walk away, but of course Sam's not going to do that, so Dean starts in on him, pointing out that he doesn't even know if the treatment will work, saying that Sam's no better than the monsters he hunts, and it turns out he knows something. Something Crowley did. Flashback time. Sam sits next to a vaguely familiar guy at a bar who's complaining about his wife and HO. LEE. CRAP. It's Lester. Lester the guy Dean killed when he was sent to kill his wife. Sam couldn't get any demons to respond to his summons so he told Lester how to do it! Sam involved a civilian in a demon deal! \o/ /o\ Oh, Sammy. I love this. Obviously Sam didn't intend Lester to go through with the deal, but yes, this is the Sam I wanted, the Sam who will stop at nothing to save Dean. Now the question is, once Dean is cured, how will he feel about Sam's actions? Will he appreciate that he got what he wanted? A Sam who would do anything to save him? Or will he consider this equivalent to drinking blood - it doesn't matter what you were trying to accomplish, you shouldn't have done it. (Also, how cute is Sam when he corrects Lester's pronunciation?)

It turns out the treatment is very painful for Dean, and leaves him unconscious at one point, so Sam worries that he's killing him (to which Cas responds that yes, he might be, but he's not really Dean anyway, thanks Cas, that's helpful). And Dean points out that if it doesn't work, Sam knows what he's going to have to do, and do you have the stomach for that, Sam? (This is Sam, finding his brother unconscious. Does look like someone who has the stomach for that? No, it does not. Also, Sam's hair in this scene!)

More nastiness from Dean! More badass Sam in response! Unfortunately, Sam decides not to hang out in the dungeon with the guy who's tired of yanking his lame ass out of the fire (literally! twice! three if you count Hell!) so he retreats to Dean's room to look at old photos. (And old pie... Sam, that pie is at least two months old. Do not take it to Dean. Throw it away.) Why is this unfortunate? Because while Sam was gone, Dean realized he was human enough for the MoL handcuffs to lose their effectiveness. And that it was painful, but not impossible, to walk out of a devil's trap. Which raises an interesting question... how, exactly, does a devil's trap work? I assumed a demon lost their demonic powers while they were in it, and they couldn't walk through it. But if it simply causes physical pain, does that mean it boils down to willpower, not ability? Could a full demon walk out of a devil's trap if they wanted to badly enough?

Anyway, Dean is on the loose, in the bunker.

We then get some truly amazing stuff... Sam and Dean playing cat and mouse, Dean choosing a weapon (rejecting the meat cleaver, picking a hammer instead), Smart Sam locking down the bunker, Dean taunting Sam, Sam looking around in terror, Dean kicking down a door, Sam locking Dean in the electrical room (and thinking he's going to talk Dean out of killing him, oh Sam, you break my heart). And Dean, tearing the door apart (with the same hammer he plans to use to kill his brother, I can't handle this) as he explains that he knows Sam won't kill him, but he's absolutely got enough demon left in him to kill Sam, and they end up with Sam's knife to Dean's throat, trying to decide if he can kill him, and oh shit, I can't, I need to watch it all several more times. SEVERAL. This may have replaced Reichenbach as my favorite Sam/Dean interaction.

(Also? How awesome is Dean's demon hair? I assume it will be gone next week. I'm going to miss it. So much.)

And then Cas shows up to save the day and he just... holds onto Dean? And he can't get away? WTF? Is it because Dean is only partially demon? Because if an angel was that much more powerful than a demon, how do you explain Castiel's not particularly successful encounter with Alastair? (Does this bother me? Not enough to care. Because here's Sam's neck.)

Now, what would Sam have done if Cas hadn't showed up just then? Would he have killed Dean? Personally, I don't think so. (In fact, I had to rewrite part of a fic I just posted because I included the possibility that Sam would kill Dean and I decided I couldn't believe in that.) He probably would have tried to injure him, incapacitate him in some way, so he could get him back to the dungeon.

Back to the dungeon, where Sam and Cas inject and discuss an unconscious Dean, who sits up, eyes clearing back to green, and I love that he can do this. I love that Jensen can show us Dean is back just by giving us this face.

I also love that he gets a face full of holy water, once again - how many people have done that to him? And I love Sam's "welcome back, Dean" face. You did it, Sammy. They let you be the hero. Thank God. 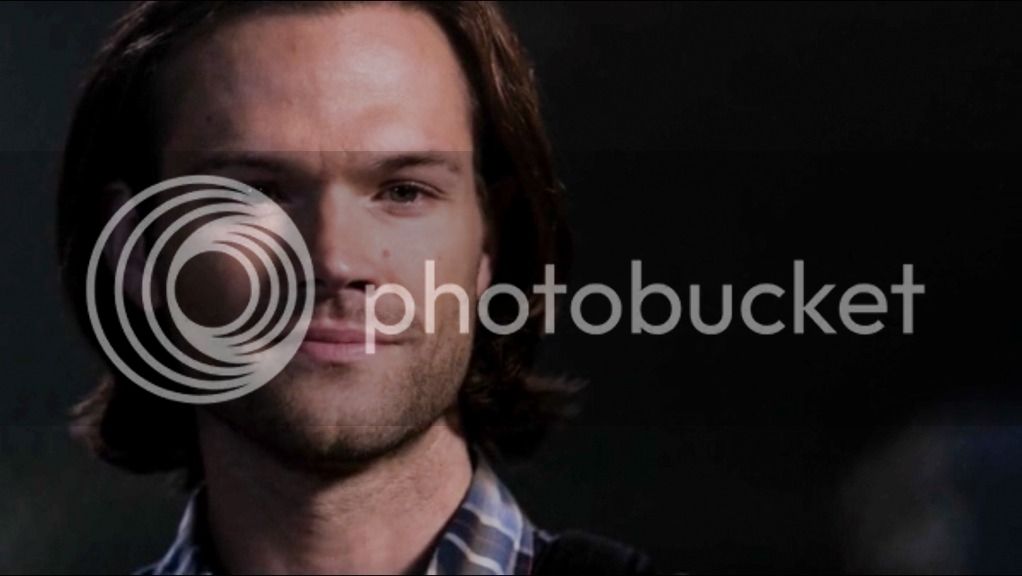 Except. Then the music gets a little darker, and we get this. What am I supposed to think about this? Does this look like someone who's happy to not be a demon?

I have to say I'm disappointed we didn't get much of a Sam/Dean reunion scene. We got Dean thanking Cas, but not Sam. We get Dean expressing regret for what he did to Sam, but interestingly, he's more concerned about trying to kill him than about the awful things he said to him. Interesting and very much in character.

And then there's a new big bad apparently? I don't care. I'm sure I'll care later. Right now I've got to watch Dean casually roaming the halls of the bunker with a fucking hammer, while his terrified brother peeks around corners. I need to watch Sam hold a knife to his brother's throat while he dares him to use it. Because DAMN.

Now, guys, it's time to face an ugly truth. The next episode is most likely going to suck. We all knew it was a matter of time. They've had three good ones in a row, this story arc is apparently over, and it just seems a statistical impossibility that 10.04 will be any good. But it's okay. I'm prepared for it.

As always, I'm unspoiled for the next episode, including the preview, please help me stay that way.